Let Them Have Weddings: Cops, Cake, and (In)equality 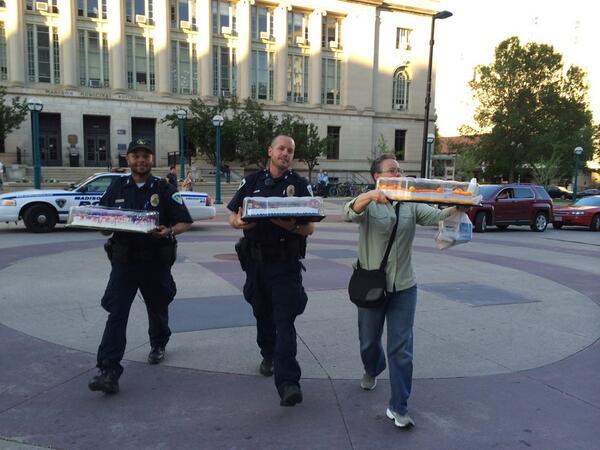 When US District Judge Barbara Crabb ruled that Wisconsin’s ban on same-sex marriage was unconstitutional, many in Dane County erupted in happiness, including the local police. This photo shows two cops in uniform, Matt Kenny and Zach Kimbrew, and one in plain clothes, Sue Carnell, carrying three cakes toward the City County Building in Madison. The cops are beaming, holding the cakes up high like an offering, and it’s clear from their looks and the length of their strides that they are moving toward an expectant crowd. It was 6:30 pm on June 6th. Scores of couples had flocked there and to the nearby capitol square downtown to get married, and County Clerk Scott McDonnell, anticipating this reaction to the ruling, had recruited volunteers to hold extended hours. The Cap Times reports that Carnell’s wife, Gail Chodron, took the photo of the cops with the wedding cakes, and Judy Karofsky tweeted it. It was immediately retweeted by the Cap Times editor and author of Uprising, John Nichols. The cop photo went viral shortly thereafter, associated with the hashtags #cops4labor, #HRC, #FairWisconsin, #equality, and #LoveWinsWI. Wedged between photos of impromptu marriage ceremonies, this image appears on Facebook where it was liked over 14,000 times, with comments like "This is why I love Madison!"

And it’s true. This photo emblematizes one of the most dearly held beliefs of Madison's mostly white progressive community: That, here, state power is different, and that the state’s representatives, the police, are benevolent and kind. The Madison Police Department has many officers who are openly gay, at least one of whom got legally married last weekend, so this photo of cops serving wedding cake to gay couples is, for some, proof of the fact that here, the police share "our" values and protect "our" interests. In fact, Carnell, one of the officers shown in the picture, is quoted by the Cap Times saying, "It's a beautiful moment to be able to have your constitutional rights. I'm in that business. That's what I do. I work every day to make sure everybody's constitutional rights are protected. And here's a moment where I feel like my constitutional rights are also now being stood up for….”

This narrow, privileged view of police power is an illusion from which Madison sorely needs to be disabused. The first step is to start seeing the difference between individuals and institutions. People who work as police officers, just like the people getting married, are our friends and neighbors. Among them there are cops who are "good" and "progressive" individuals just as there are jerks, assholes, and reactionaries. However, when they don a uniform with a badge and a gun, we no longer have a personal or casual relationship -- and we are not supposed to.

The police are members of the armed wing of a militarized state organization; they are responsible to a chain of command, and they protect the interests of those who have power, like politicians, private property owners and business elites, against those who don't, like homeless people, loiterers and youth of color. In Madison, as in the entire United States, the police serve as enforcers of white supremacy and heteronormativity. What Madison failed to see in that photo last weekend is not only the reality of this, but the connection between those two things. Serving that cake was a marketing strategy, like when elected officials get photographed kissing babies, or the New York Police Department’s failed #MyNYPD twitter campaign. In this case, the MPD congratulated gay people for properly assimilating into a straight institution -- at the same time that arguably one of the most racist police departments in the country is surveilling communities of color and colluding with federal officials in the detention and deportation of immigrants. What is perhaps most nauseating is how much good will this highly problematic photo purchased from Madison’s mostly white, progressive community.

Let us not forget that Dane County has the highest rate of disproportionate incarceration in the United States. This is not because African Americans commit more crimes. It is because communities of color are surveilled. Members of the LGBTQI community, especially trans and queer people of color, are also disproportionately the victims of police surveillance and police violence. A 2005 report by Amnesty International indicated that “LGBT people continue to be targeted for human right abuses by the police based on their real or perceived sexual orientation and gender identity.” It goes on that their findings suggest “that police tend to target individuals who do not conform to gender stereotypes that govern ‘appropriate’ masculine and feminine behavior. Race plays an important factor in determining the likelihood of an LGBT person being targeted for police abuse” (2). Rest assured, given the incarceration and arrest rates of people of color in Dane County, queers here are not exempt.

And once LGBT prisoners are incarcerated, the treatment they receive is horrific. Take these excerpts from letters received from LGBT prisoners by the LGBT Books to Prisoners Project, located right here in Madison, which sends books and other educational materials to prisoners nationwide. The Project (for which two authors are volunteers) sent out its first newsletter this month, and included excerpts in it. One prisoner from Washington reports mistreatment from prison staff:

Another prisoner from Florida indicates that he is held in solitary confinement for his own safety, a practice increasingly used in prisons in order to “protect” gay, transgender and gender-non-conforming prisoners from the general prison population. As you can imagine, such isolation is dehumanizing and debilitating. 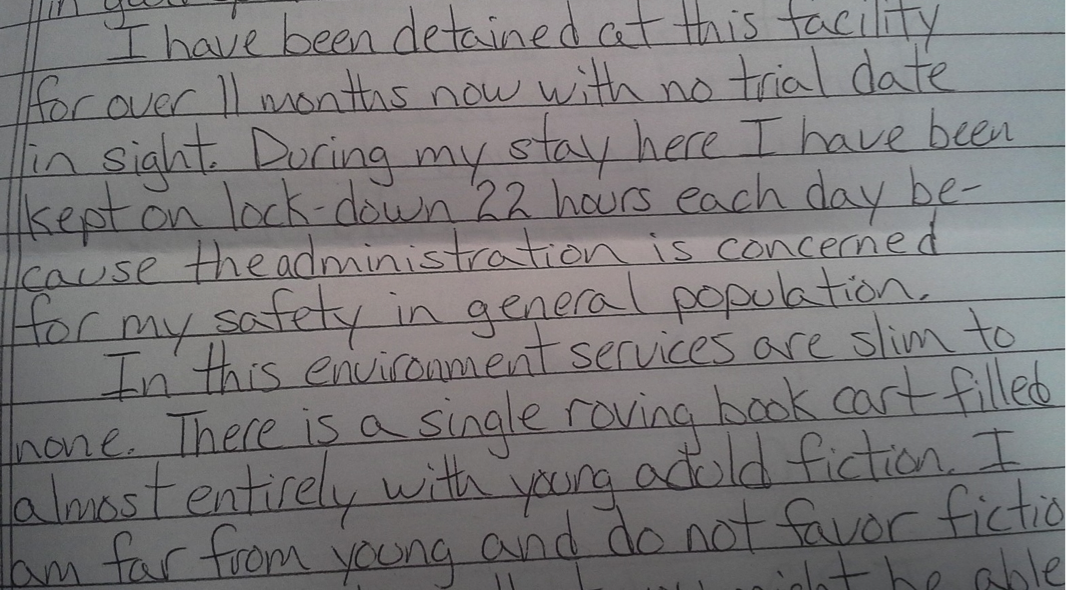 The Project receives hundreds of letters each month from incarcerated LGBT people, many reporting similar maltreatment as a result of being caught up in the criminal punishment system.

It's their party, too, after all 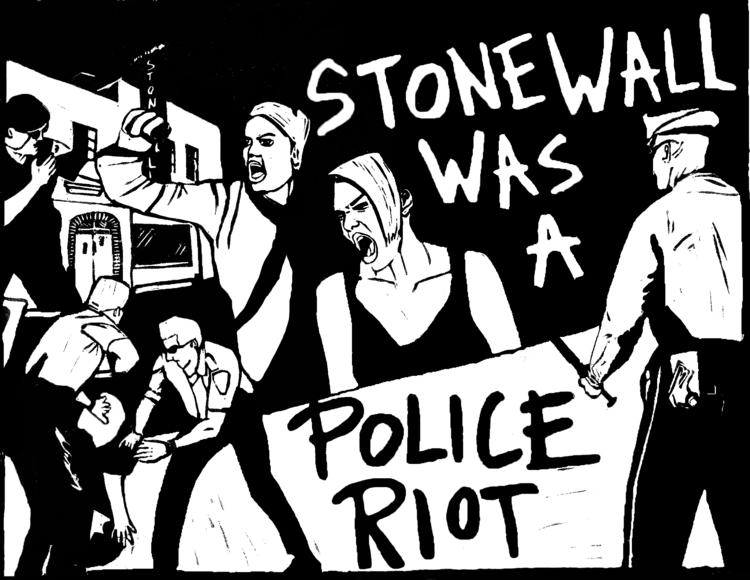 The harsh treatment that many LGBT people experience at the state’s hands leads us to consider another image circulating social media this month, a meme that says "Stonewall was a police riot," a rallying cry of queer prison abolitionists such as Black and Pink and Fierce! and a saying popularized in a poster by artist Tyrone Boucher. This meme and those who share it want to send a reminder to those lesbian and gay people who benefit from state power in the form of marriage rights that there are still people struggling outside of the loving arms of the allegedly benevolent state. When cops are eager to join your victory celebration, it says as much about what you are celebrating and why as it does about the cops. Law enforcement, as an institution, has a reason to celebrate. The legalization of gay marriage further legitimizes and naturalizes a legal system, which they represent, that doles out benefits and punishment unevenly, that confers value on some individuals and relationships while discouraging others. When some of those who were previously excluded are now included, we could call that system "fair" and "equal," but this reinforces a cultural narrative where state power is not the enemy of social movements but their ally, or -- even more chilling -- their fulfillment.

That couples want to reap the many benefits of legal recognition for their relationships is understandable, and one of us is married for this reason. We are not interested in judging those individual decisions so much as we want to locate them within the problematic systems they uphold. Our goal is justice, not noncomplicity. The fate of gay marriage in Wisconsin is currently in limbo, and we understand that for many of you, it feels like this puts your lives and the realization of your dreams through state recognition of your relationship also on hold. As we all wait to see what unfolds next, let us also remember that the price of that recognition on those terms is high, and that is almost always someone else who foots the bill.