The image of cops with wedding cake that we discussed in our last post recalls another moment of alliance with law enforcement. During the 2011 protests of Governor Scott Walker’s budget repair bill, for the liberals, progressives, and radicals who swarmed the capitol, in crowds that were almost entirely white, a handful of chants emerged as favorites: the ubiquitous "This is what democracy looks like!"; or the somewhat rarer half-rhyme couplet, "How do we fix the deficit? Tax, tax, tax the rich!" One of the simpler chants we raised, as we marched up State Street or stood together in the capitol rotunda, celebrated not our power or our commitment to justice but the presence of on-duty police officers, armed and in uniform. An example can be seen in this short video by Brenda Konkel and WYOU of when the police entered the protests with “Cops for Labor” signs for the first time on February 17th. The cheers for the police were deafening. Then, they turn into a chant of “Thank you! Thank you!” From this point onward, this chant could be heard when off-duty police entered the capitol or surrounding protest spaces as well as when a speaker mentioned the police officers who were working in and around the capitol--police officers who were standing guard, patrolling, checking bags, and, eventually, making arrests. When this chant began, we often joined in, even though we felt conflicted about it. It resonated powerfully with the mood that prevailed among the crowds around the capitol during that wonderful and terrible time. It was certainly rooted in the same naive belief in the benevolence of law enforcement that caused the cops with cakes photo to go viral. Yet what happened when we thanked the police for being at the capitol was more complicated than the celebration of the police occasioned by the viral photo.

The week before the large protests against Act 10, Scott Walker notified the press that he had placed the National Guard on alert, and the provisions of Act 10 limiting collective bargaining exempted public safety workers. Why? Because he feared what might happen if they sided with other state employees, and, in the earliest days of the so called Wisconsin uprising, they gave us all reason to believe that Walker's fears were justified. The Madison Professional Police Officers Association encouraged its members to participate in the rallies planned by AFSCME and other large unions the week after the anti-union measures in Act 10 were publicized, and they did, becoming among the protests' most visible participants. This statement from the police union and the union-endorsed marches to the capitol were acts of class solidarity in defiance of Walker’s transparent attempt to divide and conquer public workers. When groups of off-duty police marched into the rotunda, to great fanfare, part of the crowd’s enthusiasm derived from the very faint possibility that a truly revolutionary event might take place, one where the state’s armed agencies would shift their allegiance to a competing power. One of us remembers vividly hearing the police union's statement, read aloud on local community radio station WORT, and thinking, "What if they switch sides?"

This was never a real possibility. Police did join the protests, but only when they were off duty. Projecting a sense of class unity onto police who were on duty at the protests was unwarranted and possibly dangerous. When the police at the protests were on duty, they were under orders that they had to follow, regardless of how they felt as individuals. And that's precisely what happened. In the midst of the 2011 protests, Raw Story reporter, Stephen C. Webster published information from an exclusive interview with Wisconsin Law Enforcement Association executive board president Tracy Fuller, who said, “I have worked with the University of Wisconsin police officers that are there, along with the capitol police officers, and certainly I’ve worked with the state patrol officers because I’m a state patrol inspector. I’m not able to even fathom that any of those police officers would not carry out whatever orders were given to do their job.” It goes without saying that the job that police may have been called to do could’ve included riot gear and assaulting protestors in the name of public safety. While the Wisconsin protests were more or less peaceful, as Kristian Williams notes, the cops arrested 59 people during the protests, and they also cleared barricades protestors erected outside the capitol. Williams book, Our Enemies in Blue: Police and Power in America explains what he describes as a basic fact about policing:

The police represent the most direct means by which the state imposes its will on the citizenry. When persuasion, indoctrination, moral pressure, and incentive measures all fail-there are the police. In the field of social control, police are specialists in violence. They are armed, trained, and authorized to use force. With varying degrees of subtlety, this colors their every action. Like the possibility of arrest, the threat of violence is implicit in every police encounter. Violence, as well as the law, is what they represent. (9)

This sobering description of the police is not meant to indict individual police officers, but rather to explain the nature of law enforcement institutions and what compels individuals within that institution to sometimes behave in violent ways. It also helps to explain why even those cops who stood in alliance with labor at the Wisconsin protests, were still going to carry out their orders while they were in uniform, no matter what those orders may have been. If the history of organized labor in the United States can teach us anything, it is that the owning class will not hesitate to use violence when workers threaten their power or their profits. The police have often been called on to inflict violence on workers. That was a real possibility in February and March 2011.

In light of these complexities, it is worth enumerating the many thoughts and feelings that animated these "thank yous." The most obvious factor was the naïveté that comes with privilege: many who attended the protests were people whose interests are typically protected by law enforcement, and they simply didn’t recognize that, this time, they were a target, not a beneficiary, of law enforcement's watchful eye. Another element may have been sympathy. Work, as an institution, required individual police officers to inhabit a position that contradicted their class interests, to provide protection for Walker and the Republican-dominated state legislature while they stripped workers of their rights. Related to this was a profound feeling of class identification: chanting thank you at uniformed police officers was a public performance of the kind of recognition that the protestors, many of them public employees themselves, believed such workers deserved. It acknowledged that the police, like most of us in the middle and working classes, get up and go to work each day and ought to be thanked for doing so. This chant was a proper thank you, not the “thanks” Scott Walker was providing to hard-working Wisconsinites. At the same time, this chant was a tactic: police can use the threat of violence, always present at large gatherings, to do virtually anything with impunity. It makes sense to be nice to them. During the occupation of the capitol, when tens and sometimes hundreds of thousands were gathered in the streets, there was a persistent fear that a protestor or someone posing as a protestor would commit a violent act and that this, in turn, would incite police violence and discredit the protests. Publicly expressing gratitude to the cops for being there was a way for protestors to distance themselves from anyone who was not committed to protesting peacefully.

Perhaps what stood behind all of these reasons to thank the police for their presence at the protests was our unshakeable belief that, despite the imposition of austerity in Wisconsin and throughout the country, our state was still operating as we believed it should, that this was what democracy looked like, cops and all. The obverse of the protestors’ belief that the police, especially Madison police (although chants of thank you were directed toward virtually any group obviously identified as law enforcement), stood in solidarity with them was their faith, thrown into doubt by Act 10, that, in Wisconsin, the state and municipal governments existed to support their class interests, and not the interests of the owning class. A common theme among protest signs and posters exemplified this attitude. Signs referring to “Wississippi” or “Fitzwalkerstan” implied that Act 10 would transform Wisconsin into a poor state or nation, ignoring the fact that, if you are a black child in Wisconsin, it is already worse here than in Mississippi. Other signs caricatured Walker as an agent of external interests, who personally, with the help of the Koch brothers, planned to bring economic injustice to the state, as if for the first time. One truth that the Race to Equity Report demonstrates beyond the shadow of a doubt is that economic injustice was already here, not just in Wisconsin but in the epicenter of Wisconsin’s progressive tradition, Madison itself. The real irony, then, may be that, when we thanked the cops for policing our protests, the state was indeed functioning as it was supposed to--only we were implicated in ways we did not recognize just as we were targeted in ways to which we are not accustomed. 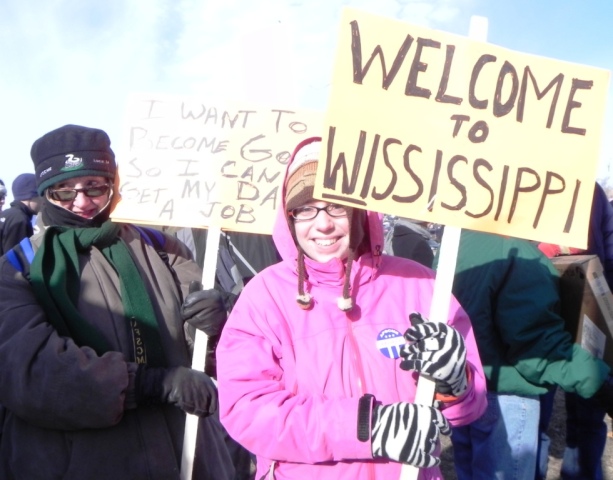