The four of us found each other through involvement and employment in parts of Madison’s activist and intellectual infrastructure–among other things, volunteering for WORT, Rainbow Bookstore Cooperative, Wisconsin Books to Prisoners, and Groundwork. The University was the magnet and the dominant institution; all of us came to Madison because of jobs at UW, either directly or indirectly through a partner. Having in common also the fact that none of us is “from” here, we would get together to share observations and ideas about post-Uprising activism and the social landscape of our adopted town.

By the October 2013 release of the Race to Equity Report, we had been meeting for two months. We read the report as a group and found ourselves unsurprised by the “seeming paradox” confirmed by it–that most white people in Dane County enjoy a higher quality of life than white people on average nationally while African American people on average fare considerably worse than African American people elsewhere, thereby establishing some of the most extreme disparities in the whole country. We are moved to respond not only by the report itself, but by the ensuing public conversation, which, in its explanations and recommendations, strikes us as limited. We wish to contribute a perspective that has not yet been voiced–a perspective that takes seriously the role of culture and art in helping us think beyond the narrow confines of business priorities.

The explanations for why the disparities exist in the first place tend to focus on the lack of job skills among African Americans, and the individually prejudiced behaviors among the white majority. The solutions under consideration–initiatives from municipal government, the non-profit sector, with private sector buy-in and partnerships–define the problem as one of flawed public institutions (such as the police and school district) and indifference on the part of the business community, all covered by a layer of inadequate sensitivity to differences. All of that may be true. What has not been discussed are the cultural representations of Madison that work to reinforce the structure of inequity. This is a problem because all debates about policy improvements are shadowed by the basic question of who comprise Madison. It begins in the segregated city: who sees who, and where. The places and events of traditional visibility remain homogeneously white–for example, events on the Square, Camp Randall on football Saturdays, and the East Side summer festivals. Once fixed in pictures, these social spaces become the dominant representations of Madison as a whole.

In the feedback loop of pop culture, proliferating pictures operate as passive declarations of who rightfully belongs, who are outsiders, and who are not seen at all. Easy to take for granted, images represent reality with an outsized authority. Occasionally, that power is revealed. In a notorious example from more than a decade ago, an African-American student recognized his own face digitally placed into a crowd shot of white students on the cover of the UW-Madison prospectus. Evidently, homogeneity on the University of Wisconsin campus–an everyday reality–was perceived as egregious by the team in charge of admissions materials only after it was reflected back in a photograph, so much so that somebody made the ill-considered decision to artificially “diversify.” We cite the incident not to point fingers, but rather to agree on at least one level: pictures matter.

A detailed example of a partial recall is to be found in Mad Town, an affordable piece of art and a popularly engaging representation of the city. Available on a t-shirt and as a poster, Mad Town exists to be worn or hung by people who have an affection for Madison. It is the creation of a local graphic artist, Lia Spaulding, who composed it according to characterizations gathered informally from an assortment of local residents. The “map” is an outline of the isthmus with labels superimposed, corresponding to different parts of the central city, walking a line on the funny side of stereotyping, making entertainment of the recognizable.

Most of the image’s information is packed into the areas of campus, Capitol Square, and the near East Side. The Williamson-Marquette neighborhood is labelled “vegans,” “downward dogs,” and “hippies.” “Art fair,” “farmers market,” and “political protests” cover where the capitol sits. The neighborhoods where the majority of people of color in Madison live, on the South and North sides, are identified by landmarks or seasonal festivals rather than types of people. The South-Central sector, over 50% of whose inhabitants are people of color, is labeled “hospitals,” “runners & scenic route,” “mass brat consumption” (for the annual bratwurst fest) and “Christmas lights” (for the holiday light festival in Olin Park). “Duck blind” (the field where the Madison Mallards play), “airport,” and “Weinerville” (the Oscar Mayer factory) represent the North Side.

Several conspicuous inclusions are worth noting. The label “R.I.P. Otis Redding 1967” over a spread of Lake Monona pays tribute to a black performer who at the time of his accidental death was crossing over into the white consumer market. Confirming the pattern of segregated America—that white people frequently consume African-American culture but rarely interact intimately with Black people—“R.I.P.” is the only inclusion of a distinctly African American element. Then there is the section of the isthmus marked “white-girl dreads.” In the flattening of deviance across lifestyle activities, from kayaking to yoga, the appropriation of a hairstyle traditionally associated with African and South Asian peoples is named as shorthand for liberated, global white people. Similarly, the “thong-&-cape-man runway” just to the north refers to a character locally notorious for riding a scooter dressed only in that. In Mad Town individual idiosyncrasy stands in for social diversity; tolerance is the understood value, the co-existence of eccentrics the ostensible result.

For all its observational accuracy, to many migrants and people of color—considerable populations according to recent census figures—Mad Town easily reads as incomplete. For one simple example, there is a lack of language corresponding to Bayview, a long established racially mixed community of low-income families which in real geography occupies a key parcel in the central city known as the Triangle neighborhood. Moreover, for years Bayview has been a site for creative organizing across ethnicities from points of origin spanning the region and the globe. It is the kind of place not often seen outside of the country’s largest cities; it is fair to say that Bayview distinguishes Madison. But it is named neither directly nor obliquely; the Triangle area is overwritten with the words “hospitals” and “student slums.” The Southwest and Far East sides, containing many racially diverse working class areas as well as clusters of affordable housing, are excluded entirely, evidently belonging to Madison but not to Mad Town. The image happened to circulate via social media over the same few weeks that conversations about racial disparities heated up (thanks to Rev. Alex Gee’s testimonial in the Cap Times), indicating exactly the gap between perception and reality: let’s talk about racial disparities but choose not to see people of color. 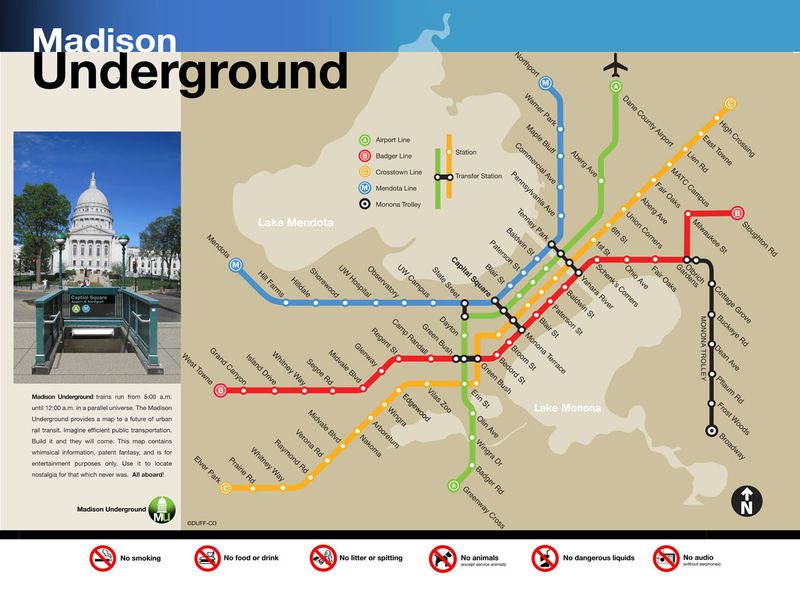 For an example of how Madison can be visualized differently, without a re-tread of Madison’s identity as radical 60s campus, funky 70s town, 80s center for political-correctness, or the union-friendly locavore reputation we have now, consider Michael Duffy’s Madison Underground, an image found floating around the web in various versions since 2010. Cribbing from well-known subway maps to refashion Madison as a rapid transit city, the illustration depicts a system covering the breadth of town, from Elver Park to the airport. It is a whimsical picture of what Madison could be—and that is, with the proper investments and vision, a city that functions well for all its residents and not just those residing on the over-served isthmus.

Stylistically, Madison Underground puts us into conversation with the great cities of the world—ridiculous on its face, but functioning to enlarge myopic Madison perspectives while humbling our achievements. Importantly, it’s an image that puts the far reaches of town on equal footing with the central city. Madison Underground speaks to the possibility of an infrastructure that equalizes all persons for the price of a fare—perhaps this is a direction our collective mental pictures need to go in before we can fully realize the progressive values for which our city is supposedly known. A city of individuals busy discovering their true selves through hairstyles and hobbies aligns quite well with the imperatives of neoliberal development and privatized life, while re-committing to a common well-being through renewed public investments in shared resources would be something else altogether. Finally, after Scott Walker’s attack on rail investments and the public sector in general, Madison Underground reads in 2014 as an indirectly defiant picture, in this case making no demands as identity groups but nonetheless a clear one as a single society: let’s move forward and build something we can all use.

We admit the contradiction, that Madison’s egalitarianism is founded on an elitism of relative material prosperity and high levels of education–advantages mostly enjoyed by white people who have had the opportunity and the preparation. As a multi-racial collection of intellectuals who moved here from elsewhere and who operate in worlds of privilege and exclusivity, we exist in that space of tension. We adore Madison for its progressive achievements and wish to contribute to Madison’s long histories of justice work and sustainability projects. At the same time, we find the divide between values and actuality painfully obvious. As long as many white middle- and upper-class Madisonians—the people for whom the dream of hard work, creative initiative, and civic engagement still works (but for how much longer?)—see racism and inequality as issues belonging to other places, or imported from outside the county, the more difficult the disparities will be to resolve.

To address the structural racism in our city and beyond, people in Madison must bury the incomplete self-image, the Mad Town of our minds, and instead build a picture that includes communities of color as part of the city’s full character and future. Let us recognize gross imperfection as a first step toward reinvigorating Madison’s tradition of uncompromising radicalism, the idealistic grain of truth in Mad Town. That tradition is our most valuable asset in this struggle. The people of this city are known for their commitment to dissent, for challenging authority, and for making visionary ideals real. A good portion of Madison’s present establishment class came of age in the era of the New Left, and we wish to reclaim that tradition for the city that Madison is now, and will be: a mosaic of races, genders, cultures and subcultures, made up of people Wisconsin-born and transplanted, communities of global and regional migrants, poor and rich—where anybody with a dream or desire for a just and liberated life can make for themselves and their neighbors a good home.

I am really impressed by your blog.I just love to read some well-written blogs like this, I would love to share with all of you that I am providing write my thesis for me service around the globe for university students who are looking for some well-written thesis from expert writers.