« On Trigger Warnings and the Halberstam Affair: a Panel Discussion | Main | Guest Post: Working for Trans Health and Self-Determination »

*This is a longer version of a piece originally published online in the Cap Times. The recent killing of Michael Brown and subsequent protests in Ferguson, MO, have called attention to the high number of deaths of black people at the hands of white police across the country. The protests have also brought more focus to the continued social and economic oppression of black people through structural racism, as well as the increased militarization of local police forces. A number of rallies and vigils have taken place in Madison, and across the country, to stand in solidarity with Ferguson residents and to bring attention to the unjust killing of Brown. Some have asked how the events in Ferguson relate to Madison and Dane County.

One connection being made is related to the armored vehicle that MPD acquired in the fall of 2013 and other questions about the militarization of our local police force. While calling attention to police militarization is very important, it is possibly more crucial to emphasize the ongoing institutional violence that communities of color have faced throughout history, and continue to face at the hands of law enforcement, whether highly militarized or not. In looking for linkages between Ferguson and Madison, perhaps the most important is the proposal for a new Dane County Jail with an estimated price tag of $135-150 million. A recent WSJ article suggested the jail proposal is dead; however, according to Dane County Supervisor Leland Pan, “There is currently eight million dollars from last year's budget that will continue to go to research, and discussion about the proposal. As expected, any funding for actual jail expansion or renovation would likely come about in the Fall of 2015 for the 2016.” 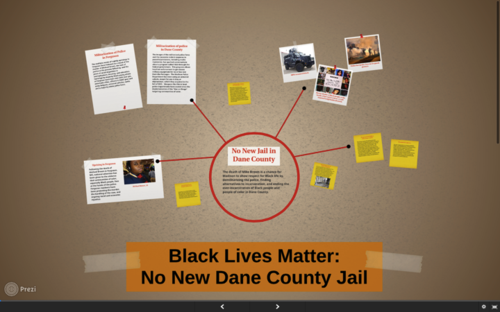 The Wisconsin Council on Children and Families’ 2013 Race to Equity report highlighted what other researchers such as Professor Pam Oliver with the UW Sociology Department have highlighted for years: Dane County has one of the worst disproportionate incarceration rates between black and white people in the country. Black folks make up 6% of the county population, and nearly 50% of the county jail population. This is not a new issue. In 2008 the Task force on Racial Disparities in the Dane County Criminal Justice System was formed and created a report published in 2010. That report and recommendations for action are still very relevant today as it documented statistics, historical patterns and implications of the vast racial disparities. The Task Force offered 10 priority recommendations that would come with a cost, as well as 10 no-cost items. Some of these have been implemented, while many have not or have room to be expanded.  Linda Ketchum, Executive Director of Madison-Area Urban Ministry, was part of the Taskforce.  She said “one of the prevalent concerns by community members was that this was going to be a report that sat on the shelf and wouldn’t be used,” which she fears “isn’t far from the truth.”

Given the tragedy and ensuing movement building in Ferguson, what the Race to Equity report and the Racial Disparities Task Force highlighted, and the history of attempting to address racial disparities, there has been less attention paid than one might imagine to the proposal to build a new jail or overhaul existing facilities. If the plan continues in anyway close to the proposal, it would be the most expensive project in Dane County history and the Sheriff’s Department is championing the new jail primarily as a solution to the lack of proper facilities for people with mental health struggles. The proposal would also combine into one location what is currently housed across three jail locations and bring up to code some areas of the jail that are failing federal standards.  A few lesser known parts of the proposal call for an increased use in inmate labor for janitorial work which would cut union jobs, and importing youth from juvenile detention centers around the state as a way to increase revenue for jail operations.

Multiple groups are working to oppose this proposal for a new jail and offer alternatives. MOSES, a local chapter of the faith based organizing effort WISDOM, has made addressing concerns over the jail proposal a priority of theirs along with their 11x15 campaign to cut the prison population of Wisconsin in half. MOSES has created a useful 2-page position paper expressing its opposition to the jail proposal. In this analysis it states, “We agree that the City-County Building jail is sub-standard, and that this must be addressed immediately. The fastest and most cost-effective solution lies not in brick and mortar, but in rapidly implementing proven new systems and policy changes to immediately stop unnecessary incarceration.  With fewer people in all three jail sites, the City-County building site can be fully or partially emptied, remodeled, and put to other non-jail use.”

Nino Rodriguez, a policy analyst with Center for Family Policy and Practice,  and a volunteer with MOSES who is one of the authors of the document, says programs like home monitoring or “the bracelet” program, could be increased to lower the jail population.  He gives caution however, stating we need to pay attention to racial disparities in these programs too, “Why are 84% of people on home monitoring white when the percentage of people incarcerated are 48% black? Is this related to the fees you have to pay to get into the program? Is it that black folks are less likely to have stable housing? Or that they are less likely to have had a job when they came into jail?"  He says if we are going to expand these alternatives-to-jail programs, then we also have to ask, “How can they be restructured so more people of color can take advantage of them?”

Linda Ketchum highlights another way to both lower the jail population, and also treat those in need of mental health treatment.  One of the recommendations in the Task Force on Racial Disparities Report was to establish a community support program (CSP) for returning offenders in need of mental health support.  Ketchum says, “each year the funding for human services in the budget is stagnant at best, reduced at worse, CSP programs are a good example.”  She goes on to say, ”Dane County CSP beds are fewer now than ten years ago, we have not increased funding for them let alone added one specifically designed to keep people with significant mental illness from returning to prison or jail.” 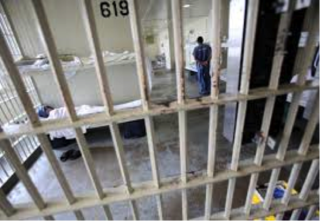 In addition to the examples listed above, other alternatives to the proposal for the jail that are being discussed and studied by these groups include: diversion courts, restorative justice programs, bail loan programs, and strengthening parole and probation programs to limit the number of parole violations ending in recidivism.

LGBT Books to Prisoners has also been working to oppose the current proposal and offer alternative solutions. Members of the group took a tour of the current Dane County Jail.  They report that they saw some of the reasons why a change is needed with the current jail. They saw the human rights violations and the need for a more humane situation, especially in the area above the City County Building. They saw the need for better conditions for people with mental health issues, transgender and LGBTQ prisoners, or others who are sent to solitary confinement in order to protect them from possible abuse from other incarcerated people. They also saw, face-to-face, the disproportionate number of black folks who live in the jail. 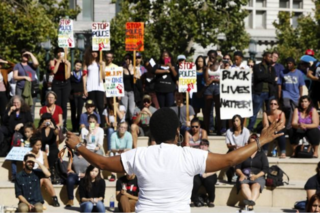 The protests we have seen in Ferguson are not only about the killing of Mike Brown and the poor handling of the situation following his death, but about years of mistreatment of black people by the police, and years of institutional racism in their communities. Black communities in Madison suffer this same day to day violence of racism, and disproportionate incarceration is only one way this manifests. The Race to Equity Report indicated that black kids in Dane County are 13 times more likely to grow up in poverty here than their white counterparts, 15 times more likely to be placed in foster care, and 15 times more likely to be sent to the state’s secure detention program. In general, black youth are 6 times more likely to be arrested than white youth. Black adults are arrested at a rate more than 8 times that of white adults.

These numbers are actually proportionately on par with Ferguson, which is 67% black, with a police force that is 96% white. For example, in 2013 86% of all traffic stops in Ferguson targeted blacks, and 93% of arrests there were of black people. But let’s not split hairs—from Madison to Ferguson and everywhere in between, police and the prison industrial complex are perhaps the primary institutions upholding and perpetuating structurally racist violence against black communities nationwide. As Mike Martez Johnson, Progressive Dane leader put it, “Being a person of color in Dane County, when I hear people say they want to build a new jail, I feel they are saying that they are willing to subject me to the ongoing violence of disproportionate incarceration.”

As we move forward as a community to grapple with the controversial new jail proposal let us ask questions that are bigger than we sometimes take the time to ask.  What if $135-150 million were proposed to address racial disparities in Dane County?  What if the Task Force on Racial Disparities would have been allotted $8 million which is the amount approved for planning and land acquisition of a new jail, or even the $500,000 that was used to create the proposal through the consulting firm Mead and Hunt?  What if we fully fund innovative and proven alternatives to incarceration? 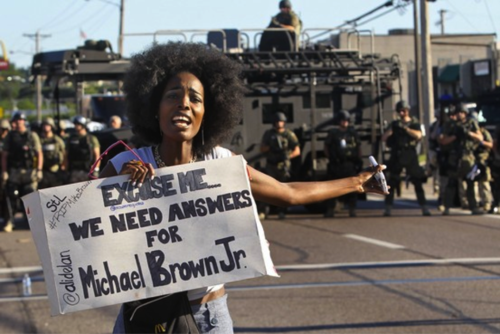 In response to the suggestion of spending the capital budget money elsewhere, Ketchum says, “You will hear elected officials talk about the building of the jail as being ‘separate’ money, that they can bond and borrow for capital projects, and that money is exempt from the property tax levy limits imposed by the State.” However, she says the debt servicing or loan repayments for those projects end up in the operating budget for the county and property taxes are increased to pay for it. “It's a matter of where I as a taxpayer would rather see my increased property tax money going; improved and increased services, or a new jail.”

There is a chance for Dane County to see this moment of national and local attention on racial disparities and violence against black people as a call to take much needed steps to create a better environment for black people and people of color to live. While some improvements of facilities may be needed, how is Dane County balancing these needs with addressing the ongoing violence against communities of color at the hands of the criminal justice system here in Dane County?  Will we build a new jail that will only continue to perpetuate the incarceration disparities well-documented?  Or will we explicitly prioritize and put resources towards ending the ongoing crisis of disproportionate incarceration rates in Dane County?

Thanks for sharing this