« This Is What an Uprising Looks Like | Main | Build Schools, Not Jails - Save UW Rally »

This is the first text in a series of nine. Certain to grow over time, the first nine are collected in our publication Madison, Wisconsin: A City in Nine Objects, newly published by Half Letter Press. Staple-bound and printed in two colors, the booklet features excellent illustrations by Kione Kochi and a lot more Madison Mutual Drift collaborative writing.

Please join us in Madison, Wisconsin, this Friday to celebrate the release and pick up a free copy! 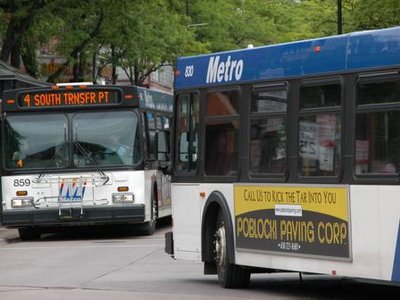 The #4 bus is a crosstown route connecting the Madison Metro system’s North and South Transfer Points. The bus runs northeast to southwest along and across the isthmus on which the state’s capital city rests. The route includes a loop around Capitol Square and turns around on both ends in working class sectors of Madison. From both transfer points buses run loops out to the further margins of the city where affordable rents make for concentrations of residents of color. For people living on the far north and south sides, the #4 is a key link to the thriving downtown core. Because the #4 crosses the segregated space of class and race as it runs its route, it stands out as one of the few physical commonalities in Madison, a city of realities that differ vastly by race and class.

The bus is a site in which we see the mingling of Madison residents from various socioeconomic classes—the homeless, the working poor, college students, university professors, business and government workers—but which, even in this space of mingling, is itself a material realization of some of the city’s inequalities. Housing costs are higher toward the center of the isthmus, where bus lines are closely concentrated. On the outskirts of the city, residents commute to the transfer points via car or bus before riding into campus or downtown. Madison’s irregular topography, spatial concentrations of wealth and poverty, and irrational transportation pricing together make the bus system more convenient for some and less convenient for others, basically falling along lines of income. Public transportation makes for a convenient object around which to launch an interrogation of Madison’s many contradictions, a lens through which to see the benefits and problems enjoyed and encountered by residents, depending on where they are located against the matrices of class, race, and education.

According to the City of Madison’s fare listings, a regular 31-day unlimited ride pass is $58.  A 31-day pass for low-income riders (available to people whose income is at or below 150% of national poverty guidelines) is $27.50. So far, so good—a sliding scale based on income certainly makes sense. But because the University of Wisconsin subsidizes the city transit system (also providing four campus bus lines that run fare-free) the cost of a bus pass for University of Wisconsin employees is only $24 for an entire year. UW Health/Hospital employees receive annual bus passes for free. While the subsidization of transportation costs is generally considered a social good, and the easing of private traffic a principle of enlightened planning, those who directly benefit most from Madison’s transportation subsidies are those who generally fall into the privileged category by employment and education. UW-Madison students (often underpaid and/or underemployed) benefit from the university’s transportation subsidies, as do its lowest paid workers. But the cost is the same for well-paid university employees—higher income staff, faculty, and administrators pay less than one tenth for public transportation than the city’s most vulnerable residents do, even with the low income discount. Considered in this way, the #4 bus is a mobile site of inequality, crossing zones of differing levels of economic privilege but also preserving them.

At the midpoint of its route the #4 runs a loop around Capitol Square, center of the Wisconsin Uprising and its sixteen-day occupation of the capitol building. The Square is the geographical heart of the city and the physical site of Wisconsin’s political system. The photogenic Uprising put Madison in the context of global resistance, bridging insurgent locales across the Midwest and across the world, from Cairo’s Tahrir Square to Occupy Wall Street. For many politicized people what happened in Madison in the winter and spring of 2011 remains a guidepost in today’s labor struggles, particularly inside the city, where the memory of that grassroots and spontaneous organizing remains visible. One cannot travel the isthmus without noticing the many anti-Scott Walker bumper stickers that partisans see no point in removing, even three years after suffering a definitive defeat. For a segment of the population the events of 2011 changed Madison permanently, turning the funky college town into a hyper-politicized seat of resistance against the extremist agenda of the Wisconsin GOP.

But even though the Uprising unified a host of constituencies, for example from outstate public sector workers to the family farmer activists to the multi-ethnic Milwaukee immigrant rights groups, the presence of African Americans actually living in Madison was not easy to see. As is often the pattern in social movement dynamics, after the movement dissipated, attentions could turn in other directions, one of them being towards this perturbing fact of apparent absence. There were African American voices, faces, and leaders in the Uprising from Milwaukee; elected officials Gwen Moore and Lena Taylor, various black pastors and their groups led the charge against the Walker agenda from that part of the state, literally busing themselves in to attend the demonstrations. But apart from the single figure of Mahlon Mitchell of the firefighters union, African Americans from Madison were hardly seen in the marches, rallies, and occupation. That a sizable population often casually noted as marginal in Madison might have been marginal in relation to a Madison-centered mass movement demanding workers’ rights and other forms of economic justice speaks to a deeper contradiction.

Racism in the world of conservatism is well understood and barely disguised. Racism in a progressive context is a more difficult problem to unpack. Madison has a well earned reputation as one of the most progressive cities in the country. Therefore, realities of overt racism aside, “progressive racism” does not simply operate but perhaps operates in a perfected form in a city such as Madison. This means that resisting, combatting, and undoing racism in progressive Madison entails asking the difficult questions. Are working class African Americans in Madison without the self-organization that is necessary for political power? If so, why is that the case? Are the numerous progressive organizations in Madison complacent in their constitution as nearly all-white? If so, what kinds of interests does such complacency serve? How closely linked are geographical marginalizations and political invisibility? What would it mean to re-territorialize Madison in the interests of justice, visibility, and the full participation of people of color? Do working class African Americans in Madison feel no stake in the politics of the place they live? How do the progressive culture and values of Madison have to be different if they do?

The absence of local African Americans in the 2011 protests reflects the increasingly obvious problems of inequity and racial justice in Madison and Dane County. It is to be regarded as somewhat convenient, then, that the nonpartisan Wisconsin Council on Children and Families released their Race to Equity Report in the fall of 2013. This report compiled existing research on dozens of quality of life indicators as measured for white and African American residents of Dane County. Its conclusion is straightforward and clear: on the whole, quality of life disparities between whites and blacks in Dane County are as wide or wider than those of any county in the entire country. A public conversation followed and continues, comprising town hall events, op-eds by different leaders in local news media, and organized small group discussions held around town. Between the utopian expression of people power in 2011—a construction largely of white residents—and the Race to Equity Report, our contention is that we now have two distinct views of the same city.

The first is recalled as a model of political solidarity for our times, an expression of widespread political consciousness complete with euphoric gestures of common struggle made between activists in Madison and Cairo, Madison and Barcelona, Madison and the Zuccotti Park encampment. The latter illuminates the social costs of racial disparity and income inequality in Madison, paid by real families belonging to communities profoundly disconnected from the city power structure, though living only several miles away from the Uprising epicenter. External perceptions confirm the dissonance—Madison has, in the same year, been praised for its enlightened livability and critiqued as the worst place in the nation to raise African American children.1 The contradiction has become so extreme that local voices have begun to call out the duplicity in public platforms, breaking the idealized self-image of Madison. What kind of a self-understanding takes its stead—and, ultimately, what steps we take to change these conditions—depends on a thoroughgoing reassessment of what Madison actually is. This includes enacting deep inquiries into the culture of this place.

We call ourselves Madison Mutual Drift, a small interracial group of Madisonians who write and organize collectively in order to better understand and address problems of inequality, social movement contradictions, and the prospects for effective political action in the city we call home. Our cultural analysis of Madison is a drift, in nine objects beginning with the #4 bus.
Like the #4 itself, this text is a route of intermingling—in this case, drifting between the mundane, the forgotten, and the hidden-in-plain sight. Frontal views of the city can only result in the fractured perceptions that allow most Madisonians to live in a state of cognitive dissonance. Considered separately, but placed in relation to each other, such that our chosen objects rub edges, we are afforded a more holistic view. It is one that makes visible the capacity for contradictions to be assimilated by an economic structure that requires extremes of wealth and power for its basic operation, and therefore reveals Madison as a study in neoliberal urbanism—creative in its idiosyncrasy, open-minded to a point, flexible (from the point of view of employers), tolerant but segregated, and above all, built to serve strivers. Our attempt to make sense of these objects in relation to our own specific geographical, historical, and sometimes personal contexts opens up larger questions about issues that are not at all unique to Madison, but indicative of dominant trends in cities across the United States and the world.

Given how the abstractions of racism and class privilege find expression in the concreteness of the #4, as an object belonging to Madison and the city’s future for which a struggle must be built, it is a see-saw, tipping on the symbolic and geographical fulcrum of Capitol Square. Or better yet, a scale of justice, lately ever further out of balance, but which in its constant movement provides that small groups of engaged people may yet find ways to co-travel the paths of future liberation.

Note: This is the first in a series of essays, published together by Half Letter Press as Madison, Wisconsin: A City in Nine Objects.