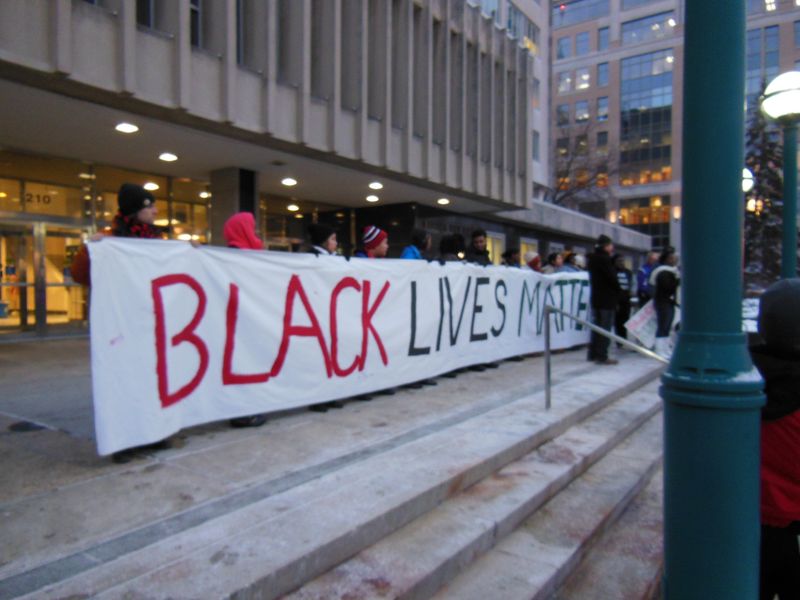 The language we use to describe what’s been happening in Ferguson / St. Louis reveals much about our politics. Those who sympathize with the people taking their anger to the streets refer to their actions in neutral or positive terms, as demonstrations or unrest, and they defend the destruction of property with varying degrees of enthusiasm (cf Ta-Nehisi Coates piece: http://www.theatlantic.com/politics/archive/2014/11/barack-obama-ferguson-and-the-evidence-of-things-unsaid/383212/). Most commentators, especially those whose voices are loudest on television news networks, speak of riots and looting.

Disagreements about what to call or how to describe the unrest in Ferguson and elsewhere that has unfolded in 2014 will continue, even after the movement has ended or entered a new phase, but a strong candidate for a name would be “The Ferguson Uprising.” An uprising is a revolt, a type of popular unrest that threatens the ruling class and an incursion into the existing power arrangements, an explosion that may or may not develop into a revolution. That Missouri Governor Jay Nixon declared a state of emergency and deployed the National Guard prior to the release of the Grand Jury’s verdict indicates that, at the very least, those in power felt threatened. If the name “Ferguson Uprising” sticks, it will be a small but important irony that many liberals and leftists in the Midwest call the protests that took place in Madison, Wisconsin, during February and March of 2011 the “Wisconsin Uprising.” As the demonstrations over the injustice of Mike Brown’s death grow into a national movement against racist police violence and the structural inequalities connected to mass incarceration, it is worth comparing the nature of these two surges and the way we talk about them.

In what sense were the pro-union demonstrations in 2011 an uprising? During those cold late winter weeks, tens of thousands gathered on Capitol Square, with hundreds occupying large parts of the capitol itself, around the clock, for sixteen days and nights. Many more marched endlessly around the capitol holding signs and assembled for morning speeches and rallies after work. Participants in the massive demonstrations aimed to criticize the Republican governor’s attacks on public workers and support the Democratic state senators who had fled the state in order to halt passage of the bill. Many who marched the square imagined themselves rekindling an upsurge of workers’ power, in an echo of the past. But the demands were less than imaginative: stop the passage of Act 10, or, as was chanted ad infinitum, “kill the bill.” Moreover, the labor movement was in fact a struggle sustained through generations, over the course of which intense conflicts took place. Workers asserting themselves through strikes frequently suffered terroristic violence at the hands of the bosses, making working class history a bloody one.

The Capitol occupation notwithstanding, the so-called Wisconsin Uprising was a minimally disruptive expression of discontent. The movement had its disobedient turns in its first several days, but when push came to GOP-shove, the movement laid down. Following the lawfully dubious, mean-spirited, and openly provocative passage of Act 10, leading figures and organizations turned mass attention exclusively to the electoral process, culminating in Governor Scott Walker winning two more elections. A social movement comprising an array of constituencies, that mobilized thousands of people who never cared about politics before, and that produced a distinctive movement culture, was channeled into a losing political campaign. Less than two weeks ago, Walker, the Wisconsin Uprising’s chief villain, took the oath of office for his second term.

With ground zero being the site of Mike Brown’s murder in Ferguson, the Ferguson Uprising, often hashtagged in social media #BlackLivesMatter and locally with #FergusontoMadison, has found expression in multiple cities and states. In most places where the new movements have generated sustained energy, #BlackLivesMatter mobilizations are extensions of discontents sparked by local injustices, as in the lingering wrongfulness of the Oscar Grant murder in Oakland and the unpunished police killing of Eric Garner in New York. Since the Ferguson grand jury travesty was returned, this has been true in Madison, as well. Public attention here already had been focused on the extreme black/white racial disparities in Dane County, beginning with the publication of the Race to Equity report in the fall of 2013. But unlike the culture of terror and intimidation as exemplified by the policing in Ferguson, Madison’s political culture is famously liberal. Thus, the discontent has been funneled into a unending schedule of town halls and public dialogue events. After more than a year of conversation, government and public institutions have made no commitments to concrete policy change, much less any type of meaningful redistribution of resources.

Led by a contingent of mostly female and queer African Americans calling themselves the Young, Gifted and Black Coalition, Madison activists have grounded their demands in the various disproportionalities as documented in the report. The coalition and its allies have served notice through escalating weekly actions that all the talk means nothing without substantive decisions to change course. With unannounced disruptions of traffic, vocal appearances at county governmental committee meetings, and “die-ins” staged in the quasi-public space of shopping malls and the UW’s College Library, the coalition has upped the ante. In their most symbolically rich action to date, the coalition timed their inauguration of New Leaders event to coincide with Scott Walker’s second inauguration ceremony on January 5, linking the publicly declared commitment of the racial justice activists to the career of Wisconsin’s GOP cabal, headed by the hydra of Scott Walker, Reince Priebus, and Paul Ryan. Though it is still early in the unfolding narrative, the evident will of #FergusontoMadison activists to reveal power through confrontational and symbolically charged tactics picks up where the Wisconsin movement of 2011 died off.

Tellingly, the Wisconsin Uprising stand-by noise-maker, “this is what democracy looks like,” is nowhere to be heard at #FergusontoMadison rallies. Instead of fetishizing democracy or the democratic process, #BlackLivesMatter speaks to damage that runs very deeply in the society, having to do with laws and policy but also going far, far beyond. What we have, then, is a dual challenge to Madison’s white liberal establishment. One comes from the insistence that actual, measurable changes be made, including the release of 350 black people currently jailed in Dane County as a radical solution to the issue of jail overcrowding and disproportionality. This particular demand tests the limits of liberal tolerance, and stretches the imagination of many mainstream black leaders. The arrival of #BlackLivesMatter in Madison presents observers with a comparison to the 2011 Uprising–what it was, what it could have been, but, in the end, wasn’t. As a second and equally profund challenge, in its uncompromising presence that thus far has chosen to stand apart from the official political process, Madison’s incarnation of the Ferguson Uprising dares tens of thousands of mostly white Walker-haters to return to risk-taking, to abandon the civility of bourgeois politics to which they retreated as their strategic last resort in 2011, to support this new uprising already in motion. Even as the #FergusontoMadison movement searches for pressure points so as to increase the purchase of their actions, this black, queer, and female-led movement provides all an update on what power looks like.

I love your blog