Karma Chávez's speech from the Save UW Rally held on library mall on February 14, 2015:

In 2011, the State of Wisconsin crossed an awful threshold as spending for the Department of Corrections surpassed spending on the UW System. The state also spends three times the amount on each person it locks up as it does on each student in our K-12 schools. Apparently the only public that Governor Walker is interested in preserving is public corrections, also known as the prison industrial complex. In the state of Wisconsin, in the academic year 2014-2015, the UW system reports there are 5,621 African American students enrolled of over 180,000 students total. That amounts to just 3% of the student body population. Meanwhile, UW Milwaukee's Lois Quinn and John Pawasarat report that in the state of Wisconsin 13% of adult African American men are incarcerated and over 40% of the prison population in Wisconsin is Black while Blacks make up around 5% of the population of the state. And I also hope I don’t need to remind you that the 2011 slashing of public sector unions had a disproportionate impact on Black folks in Wisconsin who are over-represented in public sector unions nationwide. Simply put, this budget is the latest in a series of policy decisions that reflect state-sanctioned violence and that violence has disproportionate impacts on people of color in the state of Wisconsin, particularly Black people. 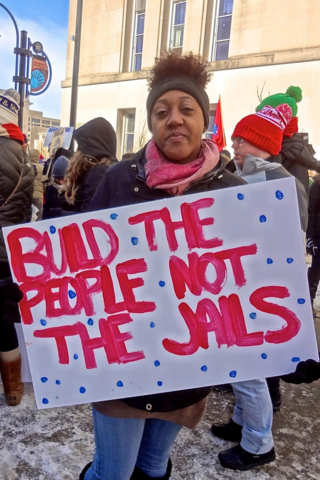 Today, we need to do defend the University of Wisconsin, but we need to be sure not to isolate these attacks on public education from attacks on our communities more broadly. We are in Dane County right now, which is one of the most progressive places to live in the entire United States. The University of Wisconsin Madison is known as one of the most progressive universities in the country. But these facts are not true for people of color. Dane County has the worst racial disparities between blacks and whites in the entire United States of America, and a once storied Afro-American Studies department at UW Madison has been slowly choked over the past decade and now told its survival is only viable via dismantling through consolidation with the other ethnic studies programs on campus. I say all of this to insist that we not simply defend the status quo that has always only worked for the few. But that we use this as an opportunity to see how all of these forms of state violence are connected and to demand that our public institutions are supported, and reoriented to serve those most impacted by violent systems.

This means insisting that that the UW system remain a public university and not a public authority. This means insisting that UW is not slashed to preserve a neoliberal program of austerity and tax cuts for the wealthy promoted by Walker and the GOP. This means not separating out UW Madison from the rest of the system in our analysis, but staying in the fight together. This means listening to and supporting our classified staff and letting them lead the way as they will be the ones impacted most. This means supporting our students of color on campus, who suffer the daily experience of micro and macro aggression. This means supporting contingent faculty and walking out on February 25th as a part of the National Adjunct Walkout Day. This means supporting the Young Gifted and Black Coalition locally, and your own local Black Lives Matter movement to end police brutality, mass incarceration, and the slow and fast forms of state violence that destroy our communities. We need the UW, but we need all forms of state violence to end and we can only do that together. Build the schools, not the jails!

In this current world, there are many schools who are offering many courses and programs, with the help of these programs a person can start his profession and grow in his career. Many schools are offering different type of courses and individuals can enroll in MBA programs in Dubai and achieve their goals.