When I jog my usual three mile loop, huffing and puffing alongside Lake Monona from my apartment at the corner of Baldwin and Morrison to the park adjacent to Olbrich Botanical Gardens and back, I pass at least four little free libraries. They serve as good landmarks, and I often think about them as I run. In the last few years, more than a few have sprung up within a few square miles of my apartment on the near-east side of Madison. Each is unique and almost all are as beautiful as the houses they sit in front of, perched on sturdy poles. One is tall, narrow, and brown, sharing the color of its owner's house but not its shape. Its two shelves are like two storeys in the kind of house you might see in the illustration of a childrens book. Across the street, in front of a house that sits on lakefront property, there is a little library with a distinctly modernist design. A miniature version of the owner's house, whose mid-century modernist architecture is less common around here than it is in other affluent neighborhoods in Madison, it features a roof with two slants that do not intersect and a striking white coat of paint. The third little library is an even more detailed miniature, complete with a gabled window, brick foundation, and shingles and siding that match the house in whose lovingly tended garden it sits. Each one was crafted with care and no small quantity of ingenuity, and their structures are lovingly maintained. 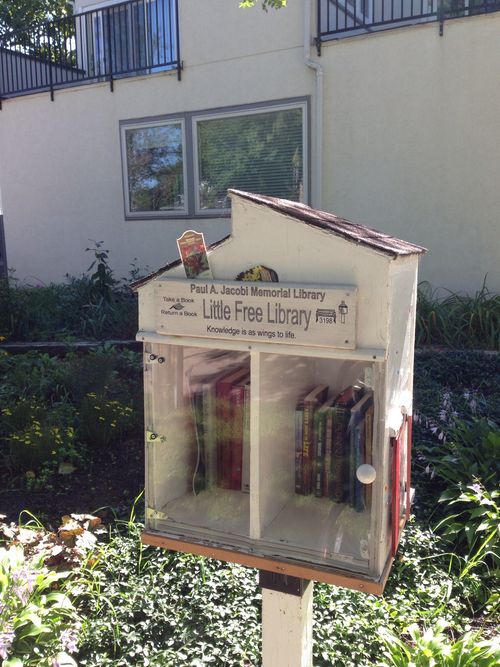 Littlefreelibrary.org calls the little library "a gathering place where neighbors share their favorite literature and stories." While I do not regularly monitor my neighbors' activities, I have never witnessed such a gathering in the proximity of a little library. In fact, I have never opened one, let alone borrowed or donated a book, and I have rarely witnessed others doing so. For me and I expect many of my neighbors, these little libraries are purely symbolic, representing important components of our collective self-image as a well educated and left leaning community while serving no practical purpose, either as a hub for social interactions or for the circulation of books and stories. Little libraries could not replace big ones, nor are they intended to; they are supplements, bringing the big libraries closer to hearth and home. The abundance of little libraries in this neighborhood signals our commitment to sharing and literacy as values we hold in common. To newcomers and visitors, the little libraries are signs that say, "Book lovers lurk here."

When someone writes the history of the architecture of the neoliberal era, a photograph of a little library might serve as a better cover image than a picture of the Bonaventure Hotel in Los Angeles, which Fredric Jameson discusses at length in his classic analysis of the period, Postmodernism or, The Cultural Logic of Late Capitalism. For what structure unique to this period better encapsulates the privatization of everything, the erosion of our social fabric, and the ascendancy of the rational self-interested individual that are the hallmarks of this period? We live in a time when, rather than pooling our resources to build spaces where people can gather in large numbers to share their love of books and the arts, we lovingly craft shoebox sized bookshelves that look like our houses, put them on sticks, and leave a few books in them, usually ones we don't actually want. Little libraries do not revive a nostalgic vision of the neighborhood library so much as they preserve it in aspic.

When I worked at Rainbow Bookstore Cooperative, we received many book donations. They were designated for our shelves or for one of the "books to prisoners" projects that lived in our basement. Often, the boxes potential donors hefted out of their cars contained only the books that they couldn't sell to used book dealers, books that dealers won't buy because no one actually wants, outdated instructor's copies containing the answers to questions in textbooks discontinued long ago or manuals for outdated versions of Microsoft Office. When we refused such donations, suggesting their owners take them to the dump to be recycled, they would become indignant, holding up the answer book for an algebra textbook last used in the late 1970s and saying, in a voice passionate enough that they almost sounded sincere, "But these are books! You can't throw away books!" Many little libraries have become depositories for such books, saving their original owners a trip to the dump and giving them the profound sense of wellbeing one gets whenever one donates a book, no matter if it's clearly worthless to anyone who actually reads. Considered in this light, little free libraries take their rightful place, alongside the ice bucket challenge and buying coffee for the next person in line at Starbucks, in the growing catalogue of empty gestures we call "giving back" or "paying it forward."

The little libraries in my neighborhood will probably survive the people who built them, but will they survive as monuments to their builders' community spirit and bibliophilia or as tombstones for the library itself, one of the last and most persistent remnants of the commons, or, indeed, to the printed book, whose death has been forecast more than once in recent memory? Maybe they are not monuments or tombstones at all but rather shrines to the printed library book, whose touch, with its special binding and covers, can trigger memories of libraries from our childhoods, memories of sharing, abundance, and limitless possibility? As libraries shaped like houses, they also remind us that the books we read and love are houses in which we live and into which, sometimes willfully and sometimes unaware, we disappear.

Definitely, The little libraries in the neighborhood will probably survive the people who built them, but will they survive as monuments to their builders. That was something very inspirational.

I have often thought about these in terms of what we value. Why books? You hit on it with our inability to throw them out, and their sheer volume and weight. Think of when you need to move, or if you have ever been tasked with clearing out the bookshelves in a friend or relative's home. Books are like anchors that we can't let go. "But I might read that someday!"