An Injury to One?

It is likely that, in years to come, we will remember the death of Tony Robinson and the protests in the week that followed as a turning point in the history of Madison. The events of this period have thrown into high relief a significant shift, both political and cultural, that was already underway and seems now definitively present. Of particular note is the action of Wednesday, March 11, five days after Tony Robinson was murdered. A multi-ethnic, multi-generational, and conspicuously queer crowd of two thousand marched behind a Black Lives Matter banner, from the Department of Corrections, to Burger King, to the governor’s mansion in Maple Bluff. Called by the Young, Gifted, and Black (YGB) coalition in coordination with the organization Wisconsin Jobs Now, the march symbolically linked three major political movements: the struggle against mass incarceration, the fight for workers’ dignity and living wages, and the resistance to the regressive Republican agenda. The three sites worked as stopping points for rallies against building a new Dane County jail, raising the wage of fast food and other poorly paid workers to $15/hour, and blasting Governor Scott Walker’s ongoing assault on workers, abortion rights, public education, and the environment. At the opening of the march YGB co-founder Brandi Grayson declared, "We are here to connect the dots." It is by making connections, through analysis and action, that Young, Gifted, and Black has opened up a moment of possibility unlike anything we have seen in recent memory.

In a week of actions, Young, Gifted, and Black channeled anger over a single, fatal incident of police violence into demonstrations that focused on the structural violence of mass incarceration, wage-theft capitalism, and austerity. In enacting these connections on an impressively large scale, with thousands of bodies blocking traffic on East Washington Avenue, the March 11 action represented the potential convergence of movements that emerged in parallel in Madison but rarely intersected. In 2011, the massive response to Act 10 was largely white, focused on workers’ rights to the exclusion of questions of racial justice, and warmly welcomed police officers whose job it was to enforce order, not realizing that police, as much or more than the governor, are perceived as a potential threat by some communities. Over roughly the same months, several of Madison's African-American leaders were focused on the campaign to fund and build Madison Prep, a charter school for black youth. That venture met strong opposition from the teachers’ unions and Madison's white progressive community, who considered it a door to privatization, which doomed the proposal. 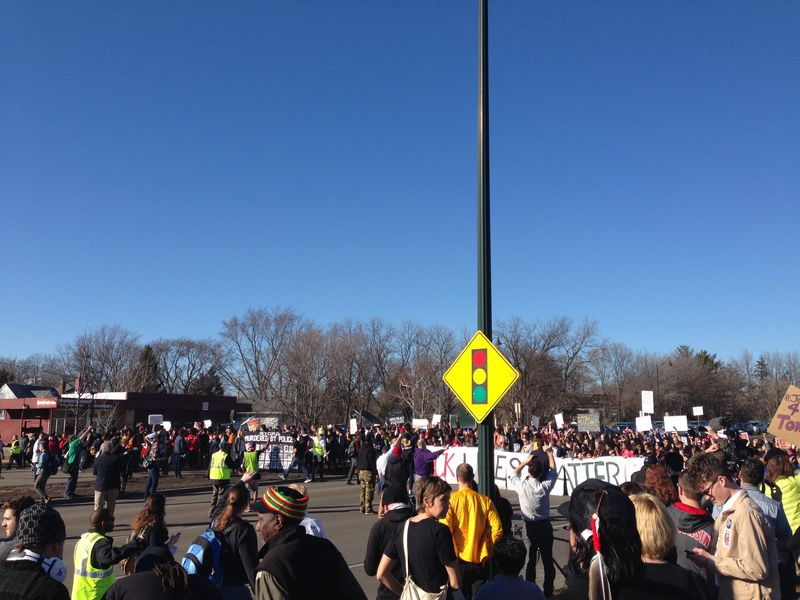 After the failures to stop Act 10 and unseat Walker, on the one hand, and the inability of the school district to direct significant resources towards black youth, on the other, a movement for racial justice became the focal point of political conversation in Madison. From the release of the Race to Equity Report in the fall of 2013 to the rise of the #BlackLivesMatter movement in the fall of 2014, that conversation was dominated by establishment voices: church leaders, the Urban League, the Boys & Girls Club, and the mayor’s office. One consequence of this limited conversation was that the dots remained unconnected. But since the fall of 2014 and the rise of new post-Ferguson leadership in the form of YGB, a different and more comprehensive analysis has been put forth. That analysis finally took an incontrovertibly visible form in the march from two weeks ago, all made more urgent against the context of yet another young, unarmed black life stolen by a police officer simply “doing his job.”

To connect the dots, we need to bring an understanding of intersectionality to our analysis of, and resistance against, Republican-imposed austerity measures. For example, it is important to note that the recently announced UW budget cuts will adversely affect students of color, in particular, mostly by making UW even less affordable. UW-Madison's racial homogeneity relative to its peer institutions is notorious, and probable tuition hikes will only exacerbate this problem. This is on top of the draconian cuts in state funding to K-12 education that already hit hardest the urban schools serving the most students of color, leaving too many academically unprepared for university work. With a college education now being a necessity for class mobility -- or even for meeting basic economic needs in a city with one of the highest costs of living in the Midwest -- racial disparity in college enrollment has a domino effect on families of color. Being locked out of college helps lock into economic insecurity individuals and their families, and collectively, whole populations.

Rendering college inaccessible means not only limited employment qualifications, but also a denial of access to the broader opportunities for study and community that the UW creates. It also means the denial of the college experience, a rite of passage that extends a certain measure of protection to students as they make the transition from dependent children to legal adults. The college experience extends the spirit of studenthood -- of new experiences, learning, and experimentation in a relatively insulated environment -- into early adulthood. Being in college serves as a safe space in which young adults learn important life skills and are allowed to make mistakes without lifelong consequences, under the guidance of a system that acts in loco parentis to govern their behavior. Young adults who do not attend college are not afforded this shelter from the more serious repercussions of their actions. Their missteps are not assessed by a Dean of Students Office or adjudicated by a board assembled to deal with student misconduct, and they are not helped through their confusion by a staff of dedicated counselors. Instead, their behavior is governed by the criminal justice system, which is fundamentally punitive. These are concrete privileges that correspond to having student status in schools of higher education.

The luxuries of being a UW-Madison student and the denial of the same to young adults outside of higher education are relevant here. As has been widely reported, the events of Tony Robinson's police encounter leading up to his death involved the use of psilocybin, a drug often associated with campus subcultures of Deadheads and hard-kick intellectuals–white bohemians not only tolerated but valued for what they add to the local cultural landscape. Only he wasn’t one of them. So one cannot help but wonder: if Tony Robinson had been a white UW student, and had his bad trip taken place on or near campus rather than in an east side apartment, would he have been fatally shot by police? It seems highly unlikely. He probably would have been calmed down by a classmate, or–worst case scenario–treated to the containment and restraint tactics that campus police routinely use when students are acting strangely, are intoxicated, or even when they are being violent. Campus taverns serve underage students every night of the week; bar fights, sexual harassment, interfering with car traffic, and emotional breakdowns are par for the course every Friday and Saturday night. Shootings of unarmed people are not.

This is but one example of the ladder of privilege now being cut from the bottom end, and yet another structural factor in the case of the Tony Robinson slaying. The mistakes and excesses of youth–a universal phase of development–is being paid for by those shut out of college, disproportionately poor and black, often with permanent consequences that include long term involvement in the jails and criminal justice system. The fight against austerity and for racial justice are in this case the same thing.

To conclude, we return to the political angle. In the weeks before the Tony Robinson slaying, the moribund, zombie-like WI Uprising was restarted by a series of new Republican assaults on public education and workers. The reanimated resistance to the Walker agenda contained a glimmer of vitality; in recognition of the #FergusontoMadison movement, the TAA offered YGB’s Brandi Grayson a visible speaking role at the February 14 campus rally. But the union-organized demonstrations in the days that followed contained no such gestures of cross-movement alliance, much less a bigger-picture analysis. Trade union members turned out to hear trade union leaders speak about attacks on trade union wages and benefits. Unlike the first go-round in 2011, this time labor leadership had four years to think through their defeats. All they could manage was the same exhausted response. Moreover, being pipefitters, iron workers, electricians, and operating engineers, if anything, those mobilized and gathered on the steps of the capitol in February of 2015 were more homogenously white and male than in 2011. Unlike the #FergusontoMadison movement, which is visibly evolving toward the inclusion of more constituencies and causes, the labor-led remnants of the WI Uprising seems to be heading in the opposite direction.

The inability of unions to organize around anything but their members’ most narrowly defined interests is why Walker’s victories are also their defeats. Despite the headline, “Unions And Black Lives Matter Activists Join Forces Against Scott Walker,” the official involvement of organized labor in the March 11 action was minimal, and in the case of the trade unions completely absent. The murder of Tony Robinson has pushed Madison’s movement for racial justice toward an enlarged coalition; the march literally mapped a pathway for a new common front, uniting different causes and identifying shared enemies. This is the watershed moment. Power will flow one way or the other, depending on whether the constituencies now under attack can recognize that their greatest strength will be found in common cause with those taking the highest risks and bringing in the best creativity, i.e., the #FergusontoMadison movement and YGB organizers.

Four years ago, in 2011, a wildcat strike in the form of a "sick-out" conducted by teachers flooded the capitol, disrupted business as usual across the state, and moved the response to Act 10 into a moment of radical possibility, forcing elected officials to take extraordinary action by fleeing the state. The change we need to prevent future police murders and to end the structural violences that are killing youth of color will require equally disruptive forms of direct action, the kind of power available to unions though rarely used by them. Imagine what actions like the March 11th demonstration and march would look like if amplified by organized labor. August Spies compared organized labor to a subterranean fire. Perhaps, by looking to the example set by Young, Gifted, and Black, unions will stop smoldering and remember how to burn. May Tony Robinson rest in peace.