« An Injury to One? | Main | "Another Budget is Possible" Rally Speech »

A Wedding Cake and the Two Faces of Madison

On the day after the killing of Tony Robinson, Young Gifted and Black, in cooperation with family and friends of the victim, organized a candlelight vigil. The event was publicized primarily via social media and the Facebook event page became a flashpoint for debates about what happened to Robinson and what, if anything, should be done about it. In one comment, someone wrote that they would not attend because they believed that the Young Gifted and Black coalition were condemning Officer Matthew Kenny prematurely by referring to the incident as murder. The person cited the photograph of Kenny delivering cake to gay couples getting married as reason to believe in his innocence. The next day, another post pointed to the photograph as evidence of the shooting’s complexity, a clear sign that Kenny was not a racist cop in any simple or obvious sense. Others circulated the photograph without analysis, pointing out the presence of Officer Kenny as one of the cops carrying cake in the photograph. But whether considered an ironic coincidence or an indication of an absolving humanity, seeing police violence toward young people of color through the lens of gay rights clouds the basic issue.

The indictment or non-indictment of Matthew Kenny is not the be-all, end-all of Tony Robinson’s murder because the problem isn’t any one cop. Our system of law enforcement permits deadly violence, disproportionately enacted upon communities of color. We won’t change the system if we cannot leave the white liberal mentality, common in Madison, that tends to favor the cop because of his proven friendliness to gay couples. Instead, we acknowledge other oppressed groups and the intersectionalities between them. That means, for example, approaching gay rights through an antiracist lens. To produce an antiracist future in Madison, we must reject the white supremacist privilege of a violent, racially-unequal police force and expect better. Doing this requires a moral and political framework that resists dividing the world into benevolent progressives and evil conservatives, the latter responsible for all the injustice in the world and the former free of complicity. The structural inequalities that shape life in our city, as they shape life in our entire world, are sustained not solely by the machinations of profit-hungry corporations and reactionary politicians. They also depend on the thousands of actions, spread thinly across time and space and woven into the thousands of conscious and unconscious decisions that constitute daily life, by which we consent to and reproduce an economic, cultural, legal, and political system that benefits some at the expense of others. The Priuses with coexist bumper stickers won’t get us to the utopian future toward which Lady Forward’s finger points; on some level, they are part of the problem.

When white Madisonians refer to the cops with cake photo, they are identifying with Officer Kenny as the man carrying the cake, the state worker with progressive values. At the same time, they are identifying with the white man who likely felt terrified when he faced a tall and athletic African American in an unfamiliar house, who perceived an unarmed, intoxicated teenager as a lethal threat. Acknowledging that murder is the appropriate word for what happened to Tony Robinson therefore entails a dreadful admission, that an act imaginable to them as self-defense may, in fact, be murder perpetrated by a state machinery. Recognizing that Tony Robinson’s death was a murder means recognizing that racism lives in and act through “good” people with progressive sensibilities and a capacity for spontaneous acts of generosity and love, not just in the hearts of monsters who live in other places. The agents upholding white supremacy are not only rural dwellers, or Southerners, or some other stereotyped white provincials. People can be otherwise progressive--supporters of gay marriage!--and still part of a white supremacist system. Recognizing this entails confronting the way that structures of racism and white supremacy permeate and constitute the “good life” enjoyed by many white Madisonians.

The officer who delivered cake to gay newlyweds, when called to help instead delivered death to Tony Robinson. This episode makes concrete the contradiction of racism in Madison. This city, its institutions, and the individuals who reside therein, make possible moments of joy and spontaneous celebration. These institutions and sometimes, as in the case of Matthew Kenny, the very same individuals, inflict violence and exacerbate crises, particularly in black communities. The police officer carrying cake is the same police officer who fired seven shots into the head and chest of an unarmed teenager. The price of white supremacy is paid by the poor and people of color, in the form of disadvantage and violence. The profits benefit all who live in the peaceful and tolerant world of white Madison. The racism of our city wears two faces. One melts you with a big grin. The other is a death's head, outwardly menacing and fearful within. But they are faces of the same city. They are the same person. They are our faces, both of them. 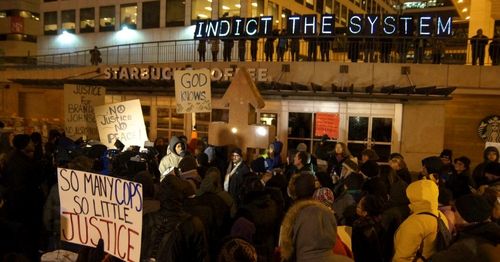 Milwaukee in solidarity with Ferguson, 2014.

Please join us TODAY, Tuesday May 12, the day of the District Attorney's announcement of charges, for a gathering and march.

Meet at 1125 Williamson Street, the location where Tony was shot 4 pm.
At 5 pm, then we will join Tony's family to march the courthouse for a moment of clergy prayer, led by Rev Everett Mitchell and a few dozen faith leaders from all over Madison.

For those of us over 60, even more useless than the liberals who have historically grazed on the political landscape are the nouveau-liberals who feel so much better about themselves and work so hard at being better people by attending workshops that critique liberals (and their subliminal racism), in their individual processes of feeling so bad for those "lamentable victims" who they see as victims of previous and current liberal inaction.