« A Wedding Cake and the Two Faces of Madison | Main | From Salaita to Wisconsin: Connecting the Dots »

"Another Budget is Possible" Rally Speech

Speech given by Karma Chávez at the Wisconsin Budget Rally at the State Capitol, Madison, WI, June 11, 2015

On Tuesday June 9th, I was one of about 180 faculty members of UW Madison’s faculty senate who voted in support of a resolution demanding that the Joint Finance Committee and state legislature strike all non-fiscal language from the omnibus motion 521 of the budget bill, and to implore our chancellor, system president and board of regents to use every means at their disposal to demand the same. At that meeting, a faculty member of 50 years at UW Madison shared with us lessons he’d learned during his first 10. In a nutshell, he said that while being together and passing resolutions is important, what he learned from the 60s is that we gotta get into the streets. We gotta protest if we want to see true change. As a scholar of social protest myself, I couldn’t agree more. Toothless resolutions are fine. As political theatre they are probably necessary. But we need our bodies in the street.[1]

I realize, at times, it seems pointless to do so. Some say it was the protest that emboldened Scott Walker in 2011. But don’t be fooled my friends, it wasn’t the protest—it was the collective decision to be weak—by refusing to engage our power in the form of something like a general strike, and by channeling all of our people power into electoral politics, a system that we already knew from the 2010 elections had been bought and sold. Let us not make the same mistake this time around. The stakes continue to be very high. 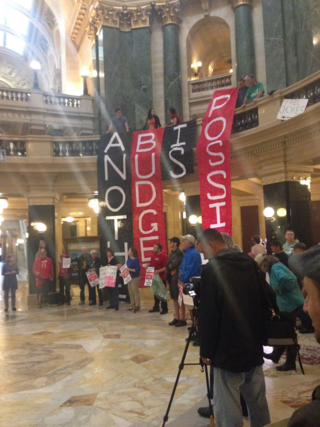 As a tenured member of the UW faculty, it is my duty to speak out. As a queer Chicana feminist who grew up working class and in a rural area, I also recognize that while it is viewpoints like mine that are most under attack right now by the changes to tenure and even shared faculty governance, it is young people who grew up like me, and their families, who are going to be most impacted by the budget. We need not to be lulled by subtle divide and conquer tactics to focus only on tenure and shared governance, while ignoring these historic budget cuts and who they are going to be most hurtful for.

Since 2011 and the first batch of Walker budget cuts, admission for students of color, first generation college students, and Wisconsin residents has declined, and admission of high-paying international students and students of alumni rose. The current budget proposal coupled with cuts to K-12 which will end programs designed to help poor students of color have equal access to a good education, will only exacerbate such differences. With the inevitable tuition increases, some already in the works, those students already more likely to take out tens, even hundreds of thousands of dollars in student loans will be thrown even further in debt. Tuition in this way functions like a regressive tax on poor and working class students, and those students are predominantly people of color. A UW education will be unaffordable for most, assuming that many UW’s will be there in the end. The fate of some UW campuses in the face of these cuts, is frankly, unknown. And of course, let’s not forget, while some of us fret about tenure, those most invisible on our campuses will be quietly let go from their jobs as janitors and groundskeepers.

I’m not always convinced the big public university is worth fighting for, but I am convinced that people deserve the right to a good paying job, to health care, and to a quality and affordable education. These are the things we must fight for, and for that, we must be in the streets.

[1] Certainly “the street” is a shorthand concept that should be questioned and problematized (which I have done in some of my scholarly work). It is not necessarily the place where movement happens—at least not the real work of movements, but it is a metonym for the public places where disruption and visibility politics happen. In moments like these, public disruptions are necessary to keep attention on issues and shift public perception, and perhaps key actors’ actions.