« "Another Budget is Possible" Rally Speech | Main | At Rainbow’s End »

From Salaita to Wisconsin: Connecting the Dots 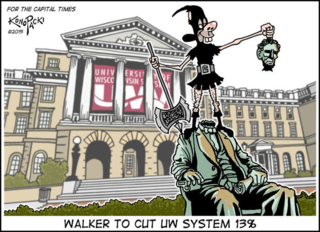 Wisconsin Governor Scott Walker signed into law his draconian and controversial budget yesterday. The budget contains many, many bad things in it. Most directly impacting my own life is the $250 million cut to the UW system and the part that removes tenure and shared faculty governance protections in the UW system from state law. State law now allows for firing of tenured faculty due to program shifts. The law change puts all the power for hiring and firing and decisions about what counts as academic freedom and necessary programs at the university into the hands of the Board of Regents. Though this week UW-Madison Chancellor Rebecca Blank sent a letter to the governor pleading with him to remove the tenure and governance provisions from state law, just a month earlier, she seemed less concerned.

In a letter and subsequent speech to the Faculty Senate in response to legislative attacks on tenure and shared faculty governance, Blank reminded faculty of an important moment in UW history. She wrote, “In the 1890s, the state superintendent of education in Wisconsin tried to fire Professor Richard Ely from his tenured position at the University of Wisconsin because of his out-spoken support for progressive views. The Regents of the University refused to censure Professor Ely, stating that ‘…we believe the great state University of Wisconsin should ever encourage that continual and fearless sifting and winnowing by which alone the truth can be found.’” Blank used this foundational story to assure faculty that their academic freedom will always be protected in the great state of Wisconsin.

If only Chancellor Blank connected recent attacks on tenure and faculty governance not to a case from the 1890s, but to a case in July 2014. Less than a year ago, one of UW’s peers, perhaps our closest peer, the University of Illinois at Urbana-Champaign made the decision to “unhire” Steven Salaita, a renowned indigenous studies scholar who was approved at every level of the UIUC to take a tenured position in American Indian Studies to begin in August 2014. After donor complaints about the content of some of Salaita’s tweets during Israel’s bombardment of the Gaza strip that resulted in several thousand deaths last summer, UIUC Chancellor Phyllis Wise notified Salaita, a Palestinian American and an avid critic of Israeli state policies against Palestine, that she would not be sending his name to the Board for a vote due to his lack of civility and alleged promotion of anti-Semitism. Eventually, under pressure, she sent his name to the Board of Trustees, a step usually regarded as a rubber stamp in hiring decisions. The Board denied his hire in an 8-1 vote, a move viewed by proponents of free speech, academic freedom, and shared faculty governance as a gross over-step. 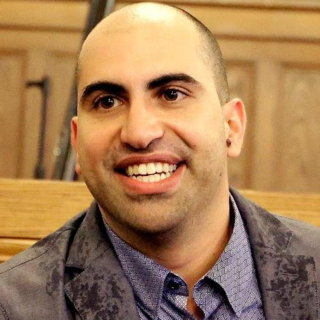 UIUC’s treatment of Salaita set the stage for the Wisconsin state legislature’s actions. For several reasons, the Salaita case should also function as a significant warning about what may be to come in Wisconsin and beyond. First, Chancellor Blank continually has told faculty that she knows this Board of Regents, and that we should trust that they will protect tenure and that they respect faculty governance. Even without these protected in state law, she is assured that the Board and UW-Madison can write policies that will enshrine these sacred principles. UIUC has such policies, and they were of no protection for Salaita when a heavy-handed Chancellor, System President and Board chose to act out of political reasons on behalf of wealthy donors.

Second, Chancellor Blank has assured faculty that she will not allow UW-Madison to have a tenure policy that is inconsistent with our peers. If UIUC is part of that standard (and it obviously is), frankly, I am very worried.

Third, while Blank’s oft-cited Richard Ely example illustrates a Board’s protection of someone with outspoken, unpopular viewpoints, as Salaita’s case clearly shows, that norm is simply no longer upheld (if it ever was), even by the best public institutions. The attacks on the country’s first public university, the University of North Carolina-Chapel Hill and particularly its progressive research centers by its state legislature and Board of Governors are also good evidence of this point. The non-existence of such protection is especially the case when it comes to political issues like Israel. Faculty and students around the country face significant backlash when they express pro-Palestinian views. In fact, I dare say that one of the main reasons few, if any public commentators have made the connection between Saliata and Wisconsin has to do with the fact that Salaita’s unpopular viewpoints are critical of Israel.

A skeptic might respond to these claims noting that Salaita’s views were too extreme to warrant protection. That same skeptic might also charge that even though Salaita had a contract, without Board approval, he wasn’t technically hired and so his case does not connect to what is happening in Wisconsin.

On the first point, I would caution that if we cannot include even what we view as extreme views within the purview of free speech protections, we are in scary times. On the second point, let’s be honest, before Salaita, you would be hard pressed to find faculty members who regarded a Board vote on their hire as anything more than a rubber stamp, especially since in many cases, Board approval comes after someone has already started teaching! Like it or not, Salaita’s unpopular views on Israel led to a case that created cracks in the foundations of the values of academic freedom, free speech and faculty governance. Salaita’s case then is part of what enabled Walker and the Wisconsin legislature’s dismantling of tenure and shared faculty governance. We all need to make the connections.

Given that academic tenure has become a way of dividing the whole of the academic labor pool into membership in either an ever-shrinking select group that enjoys protections comparable only to federal judges with lifetime appointments, or a vast and growing army of underpaid, part-time, contract, and contingent faculty with few and uneven protections, I find it difficult to defend the tenure system as it is. A serious reform that addresses this labor inequity, at the very least, is necessary. A radical demand for universal tenure would be even better. The right wing recognizes the existing divide and exploits it, knowing that those without tenure will not spend time and energy defending those who have it, same as how the non-unionized will not spend political capital defending those who are unionized. The left will never outflank the right without building a new basis for unified resistance.

That said, the cross-institutional analysis is super important. The "peer institution" trope is more than a concept, it is living construct, with organizations that officially group institutions together. Flows of scholars, students, and administrators jump from one university to another, forming webs of relationships and cross-institutional experience. Some big donors give to more than a single school. So what are the inter-institutional strategies and bodies of resistance and movement building? Perhaps now is the time for a detailed mapping of current nodes and possibilities.

As for the Salaita case, my interpretation is that the "unhiring" was punishment for political speech, ie not even a matter of academic freedom. He wasn't speaking in any official capacity, and it was not about published research or classroom conduct. It was about political opinion and the rhetoric of outrage, ie the freedom of speech granted every US citizen, no more and no less. As a precedent applied to the UW context, this is even worse than a controversy over academic research, given the vindictive ways of Scott Walker and his forces. And yet, ultimately it might be a gift. Freedom of political speech is defensible as a universal right in a way that the exisiting tenure system is not. Maybe somewhere therein lies a unity of resistance that has thus far eluded the left?

Hey Dan, I completely agree with you on the point about tenure being a divisive concept, one that protects the elite few, meanwhile increasingly vast amounts of university teaching and research labor are conducted by the many who are unprotected. I have no illusions about the university as is. And as we've talked about, I'm not looking to preserve the status quo. The question for me is what should we be fighting for, how should we be organizing. And I think part of it is to have an acute and macro sense of how the university works. Of course, I'm not always sure I want to do that work. After all, the university is my job, not my life. But what's the distinction? These are the things I've been thinking through, among many other in the midst of this moment.

That distinction though and the blurriness therein is where I slightly disagree with your take on Salaita. I think for academics speaking publicly about the subjects for which they also write and research, its unclear where one is being marked for political speech as a citizen and academic speech. In my read the American Association of University Professors (AAUP) is somewhat unclear on this too as they suggest that faculty speaking as citizens is also a matter of academic freedom protections. That blurriness is also made clear as the reason he was unhired was not because of whether he had the right to say and do as a citizen but because Zionist donors claimed that they feared he would create an uncivil and unsafe environment in his classrooms and with Jewish colleagues on campus. So, it was about his ability to perform his academic duties.

I am intrigued by your question at the end... but then again, so much appears to elude the so-called left...

I am in agreement with you