« From Salaita to Wisconsin: Connecting the Dots | Main

The new arrivals are no more!

As an operating business Rainbow Bookstore Cooperative has reached its end stage. Since the end of August the entire inventory has been discounted by 50%. The doors close today. Because of what it meant to the radical communities of Madison, and because the two of us were directly involved for a period, we offer some thoughts on the end of Rainbow.

For generations radical bookstores served a valuable purpose. Most fundamentally, radical bookstores made hard-to-get books by radical authors available before the advent of the Web. Such bookstores thrived in cities with significant leftist political communities and in turn helped those communities endure. Today, anyone with access to the Internet can download the latest tracts instantaneously, very often for free, or pay for them to be shipped to one’s mailbox in a matter of days for a fraction of the shelf price. Simply put, radical bookstores are no longer a necessary outlet for radical reading material. Books themselves, while persisting quite well, are no longer the only viable medium for long form writings. 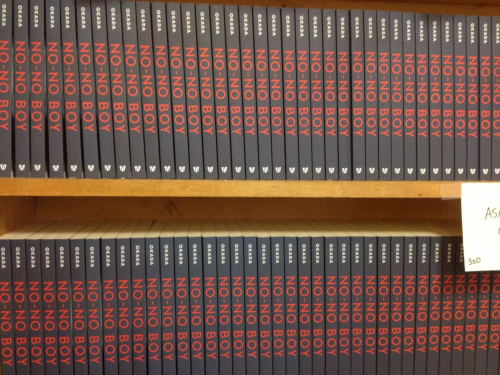 Dozens of the Okada classic ordered for a UW-Madison Asian Am Studies class.

Rainbow, like many of the radical bookstores around the country, used its storefront space for author events, social events, and meetings for grassroots groups. The space served the activist community and set the stage for chance encounters among like minded individuals. As an excellent case of radical efficiency, retailing underwrote a multiple use space. But bookselling can no longer bear the costs in maintaining this kind of community space, particularly if the store invites others to use the space for free. Though there is still a wealth of community spaces in Madison without Rainbow, the loss of a centrally located, politically defined independent space will be felt. For us this may be the most painful aspect of Rainbow’s demise. 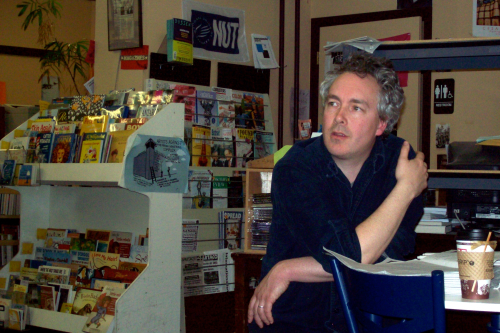 The economics of bookselling aside, it is impossible to ignore the larger neighborhood trends around Rainbow. For its first two decades Rainbow existed in an ecology of dive hangouts, the Mifflin Street Co-op, record stores and headshops galore. Rainbow itself was descended from earlier radical bookstore projects in Madison dating to the mid-Seventies. Under a couple different names, they bounced around several locations, all near the final Gilman Street address. This was the milieu of radicals, bohemians, and the nonconforming element that once made up the mainstream of UW students and campus hangers-around. Apart from today’s remnant businesses, this scene has also changed.

The new cathedrals to upscale condo living that now surround Rainbow do not house punks, hippies, low income youth or radical students. The junior faculty and the state workers, both declining populations, are not the target market, either. Instead, the new residents are frequently business school students, law school students, wealthy international students, part-time residents with money, software developers at Epic, client service people at Epic, user experience designers at Epic, and other workers in the town’s New Economy. Old storefronts are finding themselves boxed in, postage stamps in Madison’s new verticality. This part of town is no longer yester year’s center of the countercultural Hip Economy but rather the refurbished playground of the so-called Creative Economy.

Clearly, there are neoliberal vectors redefining the city of Madison, massive infusions of capital that are reshaping downtown and the near East Side–and, not coincidentally, reinforcing Madison’s existing spatial segregation by race + income. The funky architecture and low-rent aesthetic of old, weird Madison are being scrubbed away by forces much larger than the kinds of resource battles that defined RBC. What became perennial questions in the final years of Rainbow–textbooks or no textbooks? volunteer labor versus paid staff?–are impossibly quaint in comparison to the dollar figure calculations behind the poured concrete of the new high-style residences. 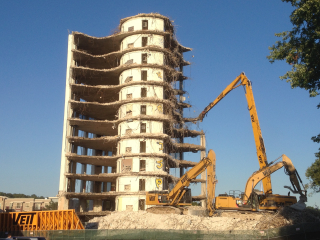 The demolition of Pyare Square Tower on University Avenue, small potatoes compared to the remaking of East Washington.

As for a narrative of the demise, a full step-by-step account would be difficult because the terminal decline lasted the better part of a decade. Although Colin worked as paid staff for two years and for two years Dan served on the board and then as president of the board, major factors predated us and notable efforts followed us. In the years of our participation certainly there were key turning points, due both to internal and external factors, when decisions could have gone one way or another. Paths that included closing down in a deliberate way were on the table. The board and staff set up many scenarios for consideration. While we and a few others advocated for ending the co-operative business and resurrecting the project as a production hub in a different location, it was democratically decided to continue the business. As it turns out, this decision extended RBC operations for more than three years but at less than half speed for most of that time–eventually, staffing levels allowed only for about three open hours per day. No matter the details of the end game, the retail business was doomed. It is just that simple.

Instead of wondering what we could have done differently to “save” the bookstore, we feel that the end of Rainbow presents an occasion to look around our city, clearly evaluate our present political conditions, and move forward with a new vision. Obviously, the Trump victory presents vastly heightened dangers to the personal safety of immigrants and people of color, in particular, and to the integrity of our public institutions and to the life of the planet itself. Importantly for the making of a new radical politics in Madison, let us acknowledge that the rise of Trump was paved in significant part through Wisconsin. Even before this national disaster the new right wing politics of hate and austerity reached full bloom here, expressed in-state by Scott Walker and blasted outward by Paul Ryan and Reince Priebus, backed by equally rabid lieutenants, both inside and outside the state lines.

The right wing takeover of Wisconsin suggests that the established left-liberal edifice, including the radical currents from one and two generations ago, have been vacated of much their effective oppositional power. After the exhaustion of 2011’s Wisconsin Uprising, the new militancy comes from multi-ethnic movements led by black and brown people, including many female and gender non-conforming organizers. We are talking about the Black Lives Matter movement, initiated and organized locally by Young, Gifted, and Black Coalition; Voces de la Frontera leading in organizing for immigrant justice; and the indigenous voices that have been at the front of struggles for water protection in northern Wisconsin and across the whole Midwest, including of course the primary front right now, #noDAPL. The evolving composition of radical political cultures might have forced a deep reevaluation of Rainbow’s mission even if the business model were still viable.

The demise of Rainbow speaks to the shifting political landscape, an upturned bookselling economy, and the resculpting of Madison’s physical landscape. A mourning is in order. The loss will be felt deeply, especially by those who volunteered hundreds and even thousands of hours. But Rainbow’s end is also an opportunity to rethink our infrastructure for dissent, to consider what radical bookstores contributed to our communities and imagine spaces and projects that more directly address the contradictions and possibilities of the present moment. We hope Madison’s radical community takes this closure as a signal to turn the page and close the book. Now we can begin writing some new ones.